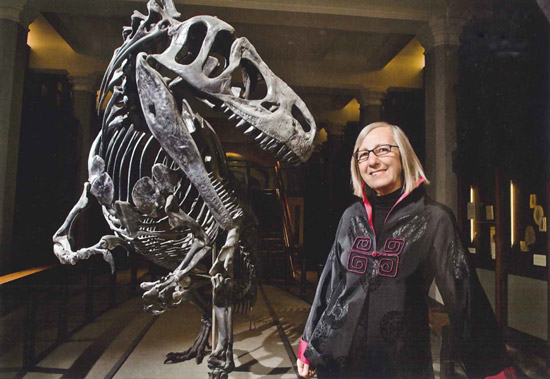 Professor Gerta Keller in the atrium of Guyot Hall, with an Allosaurus dinosaur excavated during a 1941 dig.  Photo by Peter Murphy.

Gerta Keller is Professor of Paleontology and Geology in the Geosciences Department of Princeton University since 1984. She was born in Schaan, Liechtenstein and grew up in Switzerland.  She is a citizen of Switzerland, Liechtenstein and the United States of America. She received a B.S. degree from San Francisco State University in 1973 and a Ph.D. degree from Stanford University in 1978. Since 1984 she has been Professor of Geosciences at Princeton University.

Everyone knows the dinosaurs were killed by an asteroid — but there were also mega volcanos erupting at the exact same time. What exactly killed the dinosaurs? It's a mystery. Features interviews with Gerta Keller and Jahnavi Punekar.

What Caused the Dinosaur Mass Extinction?

By Bianca Bosker,
The Atlantic
September, 2018

A Princeton geologist Gerta Keller has endured decades of ridicule for arguing that the fifth extinction was caused not by an asteroid but by a series of colossal volcanic eruptions. But she’s reopened that debate.

What Really Killed the Dinosaurs?

Gerta Keller of Princeton University has long argued that the Chicxulub impact occurred 100,000 years or more before the mass extinction, so therefore can’t have caused the mass extinction itself, which she and others attribute the Deccan LIP. In favor of that idea, scientists have recorded a number of tracers of volcanic activity straddling the end-cretaceous extinction in sediments around the world, including osmium isotopes, a mineral called “akaganeite,” iron oxide loss, and a spike in mercury levels (mercury spikes seem to be a consistent signature of several LIPs).

On June 4 (2021) Gerta Keller received the Honoris Causa Degree of the University of Lausanne, Switzerland, from the Faculty of Geosciences and Environment. Gerta was honored to receive this Honorary Doctorate Degree for her life-long research contributions to the mass extinction that killed off over 70% of Earth’s life, known as the Dinosaur mass extinction 66 million years ago.

Age of Chicxulub impact and relationship to the KTB mass extinction

Mass wasting in the North Atlantic not related to Chicxulub Impact